“The potato, like man, was not meant to dwell alone.” – NY Times food columnist, Sheila Hibben

Potatoes aren’t the first food that comes to mind when you think “romance”.  I mean, you can’t dip a potato in chocolate.  BUT- when the potato is elevated by adding it’s soul mate, butter, then things start to get a little more amorous.   Which leads us to the traditional French side dish, Pommes Annas.

Legend says the dish is named for one of the coquettes of Paris in the late 19th century.  Leave it to the French to make potatoes sexy.

Pommes Annas has 4 ingredients: potatoes, butter, salt and pepper.   The thinly sliced potatoes get layered in a pan and baked, forming a “cake” of delicious buttery potatoes.   A sexy coquette inspired potato dish seemed perfect for our Valentine’s dinner.

Step one is to peel and thinly slice the potatoes.

The sliced potatoes now get layered in your pan.  The classic French method uses a special copper pan, which of course I am without. (Feel free to remedy that, Handsome Husband)  But, an ovenproof skillet is a common substitute and that I did have.  A little melted butter goes in the pan and the potatoes get layered in pretty circles with some salt and pepper.

The pan goes over heat to start forming a “crust” on the bottom layer of potatoes.   The remaining melted butter gets poured over the layered potatoes:

Just a splash/stick of butter

The potato cake cooks on the stove top for several minutes, pressing down to help the cake form and shaking occasionally so it doesn’t stick to the pan.  Although, I don’t know how anything could stick to a pan that has 8 tablespoons of butter in it….

A potato cake in the making

After sauteing and pressing down for 10 minutes or so, cover the whole thing, and into the oven it goes:

Every once in a while, I’d reach in and shake the pan again, just to make sure the potatoes weren’t sticking.  Again…there was a lot of butter in there.  But wouldn’t you know it….

So much for the power of 8 tablespoons of butter.  I don’t even have a picture of the “pommes annas” (quotes intentional) because it was basically a pile of buttered potato slices. Not terribly sexy.

UNFORESEEN BONUS:  Although a failure by French standards, this recipe still yeilded a pile of buttery potoatoes.  And who doesn’t like buttery potatoes? Not moi.  We ate them all with our Valentine’s fondue.

So, my apologies to the coquette Anna (whoever you are) for ruining your potato namesake.  Some of us just don’t have that same j’nes se quoi.

“Only two things in this world are too important to be jested on: potatoes and matrimony.” – Irish proverb

So I’m really excited to write about this item off the list, not just because I love carbs, but because this is on the of recipes that truly surprised me.  Most of the recipes I looked at were really similar, like this one and this one.  The ingredients are really really simple: potatoes, onion, salt, pepper, flour, and egg.  Which is surprising, considering how much we enjoyed them.

I had eaten potato pancakes before, but they weren’t memorable, so I was looking forward to a second round to see if there was something I missed.  The potato pancakes I had experienced were basically glorified hash browns…and I’m not a huge fan of hash browns.

Start by grating the cleaned potatoes and then grating an onion.

The potatoes and onion get mixed with an egg, salt, pepper, and some flour.  That’s it.

Slowly pour spoonfuls of the batter into a skillet with heated oil in the bottom.  A friend with slightly more latke experience cautioned me not to make them too thick or cook over too high of heat, or they stay gooey in the middle.  To avoid this unpleasantness, I tried to sort of pat down the center portion of the dough after pouring it in the pan so its not too thick.

I pulled the latkes out of the pan and let them cool on a couple paper towels.  Then, right onto our waiting plates.  Like pancakes and omelets, these are a food enjoyed while one person stands at the stove and the others eat.  But I did manage to pop back and forth between plate and stove.

I’m sure none of you are concerned that I got enough to eat.

Fresh off the griddle! Come and get 'em!

The latkes were fantastic.  Really fantastic.  For something so simple they were surprisingly tasty and addictive.   The onion adds a little sharpness and the flour makes them light adds crispness.  Hot, crunchy, with just enough salt….all the qualities of a really, really good french fry.  I think part of my enjoyment may stem from the fact that I was expecting hash browns and was surprised with something more complex and less greasy. 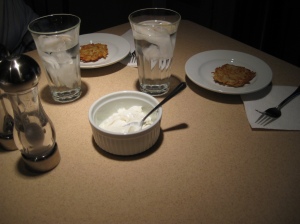 We ate ours with a dollop of sour cream and some fresh ground pepper.  I think we ended up eating about 5 or 6 latkes apiece…I told you they were good!

Handsome husband liked them with apple sauce on top and, being the carnivore he is, was wishing for a pork chop to go with it.  Maybe next time…..

p.s. A special thank you to our foodie friend Jenn for recommended putting latkes on the list.  I owe you dinner next time you’re in town!

Quick back story: A friend and fellow blogger and I were discussing the term “hot dish” as I mentioned in another post on this blog. We decided that “hot dish” should be incorporated more  into everyday vernacular as a term for something awesome.  It also works for something exciting and newsworthy.   Or as an exclamation.

See if you can use it in a sentence today.  For example:  “Hot dish!  Someone brought bagels for the office.”  or even, “The formulas on this excel spreadsheet are a hot dish.” (ok, that one might just be me)  See?  So easy.

So crack the champagne and break out the langostines: this is the inaugural edition of the Friday Hot Dish full of food news and fun from around flyover country!!!  A big filling mix of all the food groups.  Enjoy! 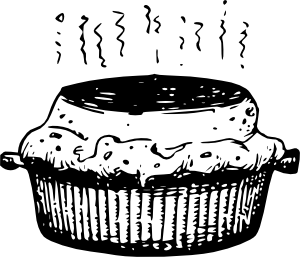 1. It’s sweet corn season! Everyone is busy boiling and grilling ears and basting with butter.  Mmmmm.  But what about after the meal?  Check out this article from The Tasting Table all about dessert recipes using our favorite ingredient from God’s Country: Sweet Corn Desserts

2. Only two weeks until I can eat the Octo-dog! Check out the 2010 New State Fair Food Then, a few weeks later, head north and devour a corned dog pizza: Minnesota State Fair.

True story: my little sister made Octo-dogs (unfried) once when we were home from college.  I don’t remember how she did it, but I’m pretty sure the octo had a smiley face.

3. If you’re local, spend a few minutes day dreaming before lunch today about your favorite yummy hot spots.  Then channel your inner Food Network host and share The Best Thing You Ever Ate, local style.  Enter the contest here.

4. The people in South Dakota know how to let loose!  Make a weekend trip to enjoy Clarke Potato Day in Clark, South Dakota.  In their own words, “the highlight of the celebration involves grown adults wrestling each other in mashed potatoes!”  Glorious.  I love living in a part of the county where carbs are still reason to celebrate.  Clark Potato Day

5. Did you watch the “Jersey Shore” premier last night?  For shame.  Atone by spending  a day immersed in Italian Heritage.  The Festival runs today through Sunday and has been completely revamped.  Italian American Heritage Festival

6. So this isn’t food news per se, but it’s hilarious and I laugh every time.  And, yes, you can bake me a gourmet cake in the kitchen you made for me with your own hands.  Hello, Ladies.

HOT DISH, its the weekend!