Me vs. The Wings

A long overdue recap of the fourth annual showdown of Me vs. the Chicken Wings:

As you might remember, I was pretty nervous before my annual foray into overeating.  Eating like a cave man in front of a couple hundred people is weirdly intimidating.  Who knew?  But I told those wings what’s what.

Let’s take a look at some of the photographic evidence:

A few of my competitors....I'm the one on the right. Note the giant mountains of wings. Also notice that I may actually be partially asphyxiating in this picture.

We’re going to need a close up of that one….

I think, if you look close enough, you can actually see my sodium levels rising.  So how did it turn out?  My goal was to eat one more wing than last year…which would have brought me to 48 wings in 15 minutes.  Did I make it?!

You bet your ass I did.  And then some. 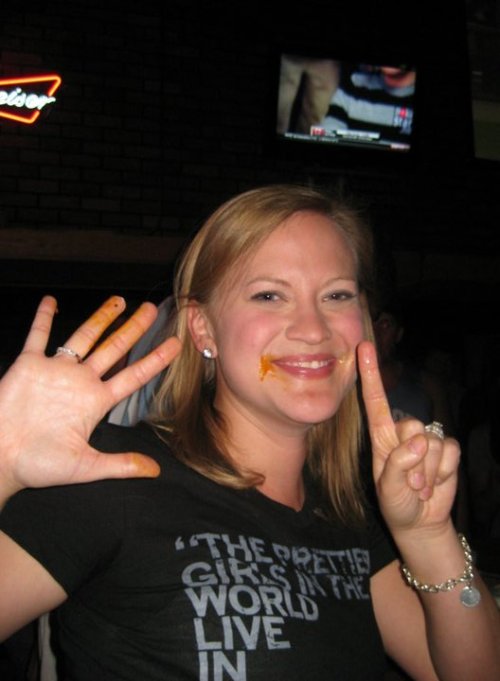 Please note my face is plastered with both sauce and a smile.  At one point I actually had to eat blindfolded….psssh.  It didn’t even slow me down.

My wing eating efforts raised over $1,000 for the I-CARE charity founded by my friends.  So proud to work with them!

I was happy my nervous butterflies moved over and made some room for all those wings! Thanks for the emails and texts cheering me on.  Only 9 months until I weigh the pro’s and con’s of eating in 2011’s event.

p.s. I’m the worst blogger ever.  This weekend I was TOTALLY committed to writing several new posts.  And no joke, our internet was down.   I’m hoping that’s not an omen….