So a couple months ago I posted about how pleased I was that the show “No Reservations” was featuring both a French bistro in Des Moines, as well as a tiny, remarkable meat locker in Jewel, Iowa.

But it was not to be. To the cutting room floor.

Anthony Bourdain, I think you’re great.  But seriously, editing out Iowa and keeping Texas in your “Heartland” episode.  That I cannot overlook.  Everyone knows Texas is not the Midwest; Texas is Texas.  (shakes head)

BUT- like so many things in life, food television karma is cyclical.

TONITE: Man vs. Food airs an episode set smack in the middle of Flyover Country.  And something tells me that Adam Richman will have an appreciation for local flavor that Bourdain obviously did not. Tune in tonight on the Travel Channel. Check out the full article here: Man vs. Food

Back tomorrow with reviews and a nostalgic French recipe.  Until then…

My Uncle came for a weekend visit this summer with my Dad.  They are great house guests because they like to have drinks, and eat, and watch The Masters.

While on their visit, my Uncle mentioned that my aunt bakes her own bread and has several “levains” she has begun and uses to make sourdough bread.   One of those involving grapes from a Napa Valley vineyard.  I know…awesome.

So, to my Uncle and Aunt….I apologize.  You have a gift I do not.

Using this guide as well as this guide and the advice contained in The Joy of Cooking I attempted my own sourdough levain.  More commonly called a “starter”.  I’m no Alton Brown, but the process involves letting yeast, water, and flour ferment while “feeding” it with additional flour and water.  When the levain develops the proper flavors, its ready to be used as a base for bread.

At least that’s how it’s supposed to go.

And yes, I do own a trout shaped spoon rest. 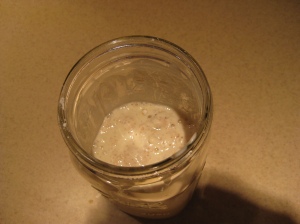 Nothing.  Attempt #2 did not change.  Nothing happened.  No bubbling, so frothing, no expanding.  Huh. (scratches head)

Attempt #3 started well.  On day 2 it had a little bit of a yeasty smell….and then another day or two, it started to smell sour…sort of like booze (which according to my Facebook friends,  is what you’re going for).  Then….

It turned black.  No seriously.  The “hooch” portion (the liquidy stuff) turned a dark bluish black.  It. Was. Nasty.  I think that a freakishly hot day made it too hot in our kitchen….

…or something like that.  It was too gross for a photo.  Trust me.

So,  after three valiant tries, I felt entitled to cross “Sourdough Bread” off the list.  A girl can only endure so much.

But I’m still curious as to what I was missing.  Part of me thinks that I simply lack the patience to give the starter the attention it needs.   Any tricks I missed?  Anyone out there had trouble with this?

In the meantime, I will stick to the lovely sourdough at my local bakery.  They  have the process down pat.  Well, the bakery and my Aunt.

p.s. Only 3 items left on the list!! Get ready to make suggestions…we have a new list to form!