“Why not make daily pleasure out of daily necessity?” – author Peter Mayle

Coq au vin, contrary to my initial impression, is not “fancy” French food.  It actually developed as a way to use the old rooster (the um, coq) in a dish after he was past his prime on the farm.  It’s actually an old and rustic dish and much more of a everyday dish than a fancy indulgence.

And, unlike the soufflé, it won’t judge you for not being able to speak French or asking directions to the Eiffel Tour.  It’s friendly French.

While the traditional recipe calls for a rooster, most contemporary ones, including the recipe I used, substitute a chicken.  Although, I kept thinking of Tom Colicchico on Top Chef in an episode where he kept saying that Casey had NOT made coq au vin because she used a chicken.  Sorry, Tom, but our flyover grocery was out of rooster. 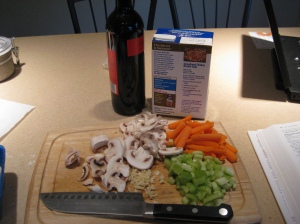 Start by cooking your bacon in the bottom of a large, heavy pot or a dutch oven.  Remove the bacon after its cooked and put the chicken pieces in.  I bought chicken quarters and then broke them down.  Tip: Chicken quarters are insanely inexpensive, so if you get comfortable cutting up chicken, you can be very budget savvy.

The chicken gets browned and removed and in go your chopped veggies to brown in all that yummy flavor.  After the carrots, celery, and garlic are browned the chicken and bacon go back in the pot with the chicken stock, thyme, and dry, red wine.

Half a bottle of dry red wine. 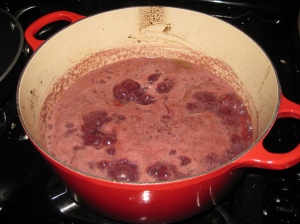 Cooking with wine....a lot of wine.

At this point in the recipe, you can cover the pot and put it in the oven for 30 minutes.  BUT- I didn’t do this.  I just let it simmer away on the top of the stove on low heat while the liquid reduced and let the chicken cook in a bath of wine. See?  So much more easy going than a soufflé! 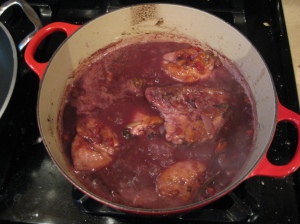 A bath of wine. Which sounds terribly relaxing.

Now you add a berrre manie to the pot.  This just means a smooth mixture of butter and flour.  This will thicken the sauce and add richness.  That’s  because its butter and butter can do anything.

While the pot is simmering, saute your mushrooms in butter and add to the pot.   Also,  add in the small onions and let it cook for another 10 more minutes. Annnd, you’re done. 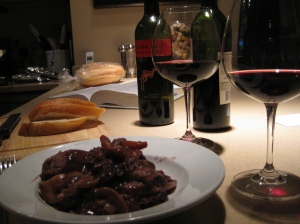 Coq au vin with red wine and some crusty bread.

Serve it with some crusty bread.  Even the plating is simple and delicious. 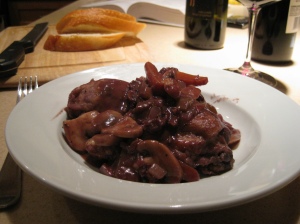 French food even us loud Americans can make

And how was it?  Silky and rich.  The dish is surprisingly complex for what is essentially a chicken stew.  The wine adds a little sharpness and the butter and bacon keeps things silky and rich.

UNFORSEEN BONUS: Not only is this pretty simple to make, you can also start it the night before.  Or reheat it.  Or make it in the oven.  Honestly, this is rustic French food at its most useful!  Hellooooo, leftovers.

I’ve said it once and I’ll say it again:

This entry was posted in 30 Before 30 and tagged chicken, coq au vin, French, turning 30, wine. Bookmark the permalink.