“In my experience, clever food is not appreciated at Christmas.  It makes the little ones cry and the old ones nervous” – English food writer, Jane Grigson

I wasn’t trying to be clever by doing a “Christmas in July” dinner.  In fact, the idea didn’t even cross my mind when I added “Crown Roast” to the list of 30.  Had the item been “roast goose” I’d obviously have been mentally queuing up the carols.  I knew that crown roast was a festival meal fit for a celebration, but I started to get worried as I looked at recipes.  Every review seemed to say “a new Christmas tradition!” or “I can’t wait to make this again next Christmas!”.

So, unexpectedly, I prepared a Christmas dinner in the middle of a July** heat wave. 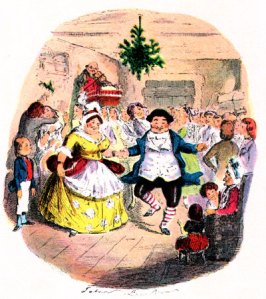 And it was delicious.

To begin: a Crown Roast is a rack of pork ribs that have been trimmed, frenched, and tied into a round so the ribs can stand on end while roasting.  The shape of the roast mimics a crown, hence the name.  Also, I like to think its a meal fit for royalty, but that’s just because I like fancy stuff.

Start by, once again, befriending your butcher.  I explained what I wanted and our butcher found and trimmed the ribs for us.  We did the trimming and frenching ourselves at home, but a butcher can do this for you. 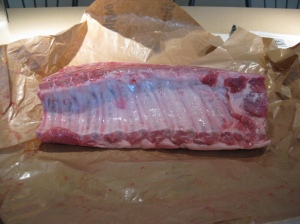 NOTE: I made my first mistake here.  We were having 6 for dinner, so I had him cut down the rack. DO NOT DO THIS. Spend the extra money and buy the whole rack.  We discovered an hour later that our roast was too short to bend into a full crown (less ribs = less length = tighter circle).  In fact, we couldn’t even stuff it.  I just made this stuffing separately, baked it, and served it as a side dish.

So, once you get this thing home, you cut the extra meat from between the ribs (save it for the stuffing!) and then french the ends of the bones.  Frenching is when you take a sharp knife and clean all the meat etc. off the bones.  You’ve probably had lamb chops like this.  The roast gets seasoned, bent in on itself, and secured with cooking twine.  I seasoned it with salt, pepper, thyme, and marjoram.  It goes into a roasting pan and then pour 1 1/2 cup of water in the pan to keep it moist.

I didn’t take a picture of this…I was still berating myself for lacking basic knowledge of roast engineering.

The roast goes in the lower 1/3 of the oven at 350°.  After about 30 minutes, cover the tops of the bones with foil.  You’ll want to periodically check the roast to see if you need to add additional water.  I added additional water.  Then some white wine and some chicken stock as well.  Cook until its out of poisonous range, 155°.  It took our 12 rib roast about 2 1/2 hours. 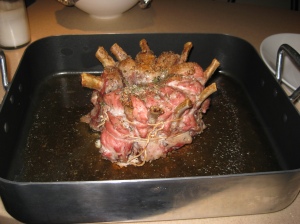 Fresh out of the oven!

See all that lovely juice in the pan?   While the roast was resting, I added that juice to a saucepan with a little wine and chicken broth and heated until bubbling.  I added a little butter and some of the same seasonings.  Keep heating and reducing.  Then, I whisked in a mixture of cornstarch and water and cooked until thickened.  Wanna know what?

I just made gravy!!  Cue “Joy to the World”….this is cause for celebration! 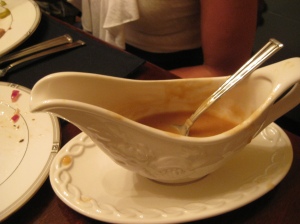 Plant a flag...I have climbed my Everest!

Serve up the stuffing and pour some wine/eggnog/wassail, we’ve got a roast eat!  We were really excited about how fancy it looked.  Check out this lovely pic: 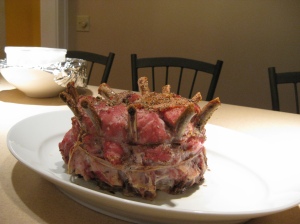 Ready for the Christmas Feast

And now a picture of it on the table! 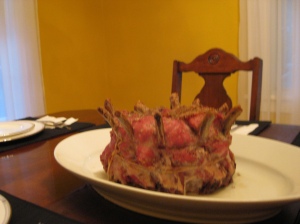 Ready to carve the Christmas Roast!

And now we’re officially carried away: 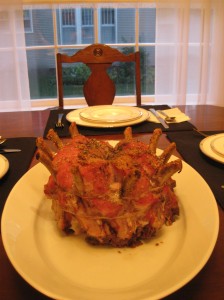 And all the Who's in Who-ville were singing!

The roast was juicy and tender and looked glorious while being carved on the table.  And, minus some of the butchering, the roast is pretty easy to make.  If you had a butcher do all the prep, this would be a pretty painless celebration meal.

UNFORESEEN BONUS: The roast had all the traditional seasoning flavors that we associate with big holiday meals.  So, the house smelled like Christmas and our meal tasted like Christmas. And our dinner had all those same holiday memories and feelings without eating the same old turkey.

God Bless Us, everyone.

** So I just looked at the calendar and realized that technically, we had Christmas in August.  Oopsies.  I’m going to plead poetic license on this one.

This entry was posted in 30 Before 30 and tagged butcher, cooking, crown roast, gravy, pork. Bookmark the permalink.